Modern Materials Handling: Bins, totes and containers: A place for everything

Modern Materials Handling: Bins, totes and containers: A place for everything

Bins, totes and containers: A place for everything

Even when you aren’t customizing, it’s worth the effort to make plans to maximize for operational efficiency to total cost of ownership. 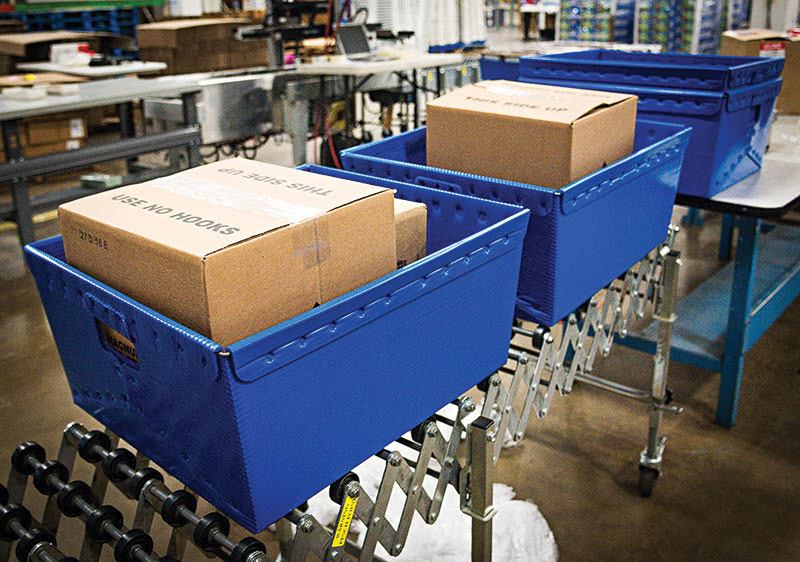 Overall size and weight of containers are key ergonomic considerations during the selection process.

“Can you check to see if those parts we talked about are over there in the blue bins?”
“Not here.”
“How about over in the red totes beside the conveyor?”
“Not there, either.”
“Then they must be in the steel container over in the corner.”
“Guess again.”

On the surface, this sounds like an inventory management problem. And on one level, it is.

But more importantly, it’s an even more basic problem with the bins, totes and containers at this mythical facility. Honestly, insufficient thought was given to matching inventory to particular storage units before buying one or even thousands of them.

“A place for everything” might be an old saying, but it works for bins, totes and containers. Finding all those right places starts with a plan.

Totes and their cousins are durable and reusable over several years, says Andrea Nottestad, senior product manager at Orbis. “Selecting this equipment needs to take into account how it will be used over a long horizon,” she continues.

That requires a plan up front, taking into account not just the parts that will go into these storage units, but how they will interface with everything from people (ergonomics) to materials handling equipment (special features for efficient handoffs).

There’s also the matter of total cost of ownership. And, as you already suspect—sustainability, but perhaps not quite how you were thinking of it. More on that in a bit.

This is not an attempt to over-complicate the selection process. Sometimes planning is as simple as selecting the right size for specific parts and color coding for operational efficiency using a standard design.

And plenty of standard designs are out there. Quantum Storage Systems alone offers more than 4,000 standard totes and bins with as many as seven different colors in each design, explains Ed Granger, director of sales. The company sells millions upon millions of them annually. So, there’s something to be said for simplicity here.

However, you do need to decide up front on your selection criteria rather than wishing you had one later on when those critical parts are tough to find.

When asked to break it all down, Dave Anderson, sales engineer at Flexcon, says this. “You can go basic/basic or custom/custom or somewhere in between. For basic/basic, people typically want the lowest cost solution that maximizes the cube. For custom/custom, that switches over to very specific designs that are often tailored to automated handling these days,” says Anderson.

On the basic end of the spectrum, your solution is likely already in stock at one of the suppliers. Key considerations here include quality, price and capacity of the container, explains Anthony Placencia, containers manager at Topper Industrial. Quality and durability are also important even in the most basic of containers, adds Placencia.

There’s also the matter of availability and delivery times, says Granger at Quantum. “Yes, the Amazon effect is in effect when it comes to totes and bins. People want it now,” he adds. 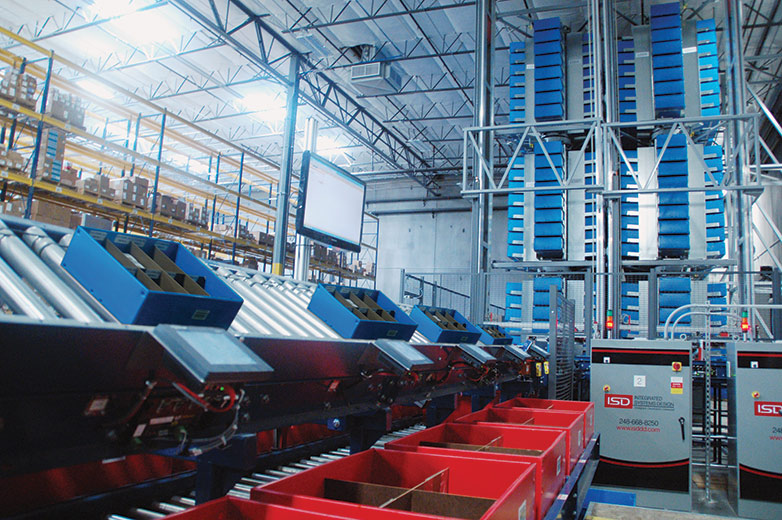 But they also want it the way they want it, says Barbara Majerus, vice president of sales at MDI. “Everyone has their own ideas about how they want to organize their facility and manage parts,” she adds.

“It’s best to fully understand your application then decide on the design that will deliver the optimum solution,” says Justin Beckerman, design engineer at Flexcon.

An extreme example of custom design is the tote Flexcon designed for use in automated storage systems. It holds up to 70 pounds. But it’s not just any tote for an automated storage and retrieval system, this one is patent pending and has sidewalls that are actually 32% holes. The totes allow water from sprinklers above to drain out and help to extinguish any fire below. That design feature saved the user more than $3 million in additional sprinkler costs (see Modern Materials Handling, March 2022).

Adding a new design feature can turn an established design on its head, too. Consider the PALLET+ from Schaefer Plastics North America, says Andy Schumacher, vice president of packaging. Based on a traditional pallet design, the container features sidewalls with heights from 63.5 to 83.5 inches, providing protection during storage, line-side staging or even transport of inventory. The containers can stack four high on the floor and collapse to less than 12 inches as needed.

MDI’s Majerus tells the story of tote design for retail goods that went through 18 design iterations. Not only did the tote have to travel on high-speed conveyor, but it required offset handles for manual handling with high efficiency. It’s now used in the United States and internationally in high volumes, Majerus adds.

It’s worth noting, says Orbis’ Nottestad, that the right design is not the most complex design. “People need to determine the tradeoffs between the value of certain design features and the cost of including those features in the first place. There is such a thing as overcustomizing,” she adds.

It’s not uncommon for tote designs to go through many iterations to match the product to the tote for maximum use efficiency.

Materials and cost of ownership

Experts agree that cardboard totes and bins will live on forever. But they don’t do the job for every instance. And they are often fairly short lived. Typically, the next step up is to plastic coated cardboard and then to injection molded plastic for totes and bins. Meanwhile, wooden crates are increasingly being replaced by steel or molded plastic containers.

When it comes to containers, the lifespan of steel over wood is extended at least tenfold, says Placencia of Topper Industrial.

Such extended use more than compensates for the initial cost of the equipment, lowering the total cost of ownership comparably. And longer life certainly minimizes the frequency of buying new equipment and the challenges that go with that cycle.

When it comes to plastic anything, there will be a discussion about sustainability. And that is certainly the case with totes, bins and containers. But the conversation here is a little different than you might expect.

Most people do not think of plastics as sustainable since they take just short of forever to break down in a landfill. But there’s more to plastic here than that.

Instead, the discussion goes to reusability for plastic bins, totes and containers during their life, and then recycling later to make new ones.

In fact, “reusability is more important than recyclability,” says Majerus. Others quickly agree. Anderson of Flexcon reinforces that by explaining that it’s not uncommon for any all-plastic version of this equipment to have a useful life of five to 10 years.

And as Schumacher of SSI Schaefer explains, his company takes fully used totes, bins and containers from facilities and grinds them up for reuse in next generation equipment. SSI Schaefer then offers a credit for future purchases based on the market price for that recycled plastic.

Schumacher also talks about the use of ocean-bound plastics. Both polyethylene and polypropylene are reclaimed from the Atlantic and Indian oceans. As much as 50% of these Clear Stream plastics are mixed with virgin resin for bins, totes and containers for non-automated applications, explains Schumacher.

Last year, SSI Schaefer used more than a million pounds of the recycled plastic. Schumacher expects that to become a more standard material in the next three years.

Orbis also has a stake in ocean-bound plastics, says Nottestad. It is focused on what it calls coastline plastics retrieved from within 32 miles off the coasts of Haiti, Egypt, Philippines, Indonesia and Brazil.

Yet another alternative material here is BIOX from Treston. These bins are more than 90% wood-based renewal materials. It’s residue from pulp-production processes and cellulose fibers from sustainably managed forests, says the company. It’s claimed to have the same look and feel of traditional plastic bins.

While many of the bins and totes going into facilities today are for automated systems, the ergonomics of manual handling are still high on the planning list, explains Majerus of MDI. “It’s all about the impact on employees,” she says.

Key considerations include overall size and weight for ease of handling throughout the day. Handles are another important consideration. Concerns range from the shape and surface texture of the handles as well as their placement on the container.

There’s also the matter of noise. “Acceptable noise levels in a facility are highly subjective and include everything from conveyors to lift trucks,” says Majerus.

However, totes and bins can be designed to specifically reduce noise as many of them travel around the facility on conveyors and other equipment. “It’s an important consideration that has direct impact on the worker friendliness of the facility,” adds Majerus.

The bottom line in bins, totes and containers is simple. You have plenty of options to tap into even without a custom design. And it’s worth the time upfront to ensure you’ve got the right ones in your facility for the next few years. 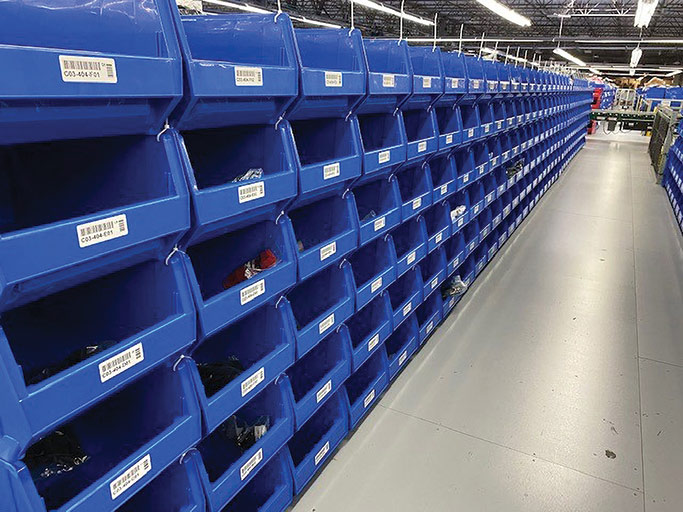 Gary Forger is Digital Editor – SCMR.com, and a contributing editor to Modern Materials Handling. He can be reached at gforger@peerlessmedia.com.