Old National Bank Achieves More By Including All Abilities

Old National Bank Achieves More By Including All Abilities

During National Disability Employment Awareness Month, we’re is saluting people who have stepped ahead, above and beyond in the name of equitable opportunity and employment for people with disabilities.

In a time of worker shortages and employment uncertainty, actively attracting and hiring people with disabilities is a way to recruit a dedicated workforce, boost DEI efforts that benefit everyone, and enhance overall business success by adding different perspectives and ways of thinking. 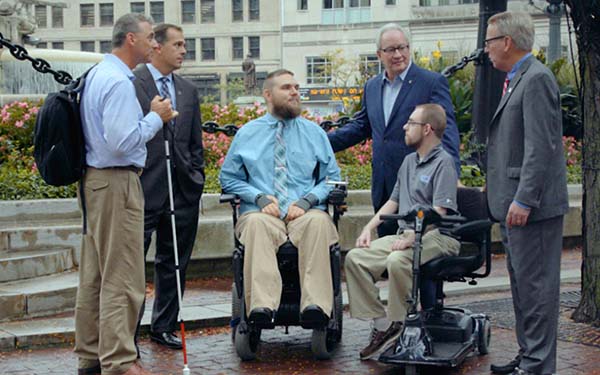 My personal story is that when I was 17, I was in a dirt bike accident and suffered a spinal cord injury. I was paralyzed from the neck down. As a junior in high school, I had no clue what a disability was all about or what it meant to count on other people to help get me up every day.

After two years of recovery and therapy, I went to college and received a degree in PR and advertising. My dad is a judge, and my grandfather was an attorney, and so I had the great benefit of their personal connections. They helped me get meetings with local executives after my graduation, including the CEO of Old National Bank, which led to a job offer to come aboard. The job was to help the company and the communities we serve become more inclusive of people with disabilities.

I remember thinking, I don’t know what that means or how I can do that—but how am I going to pass up an opportunity like this? To join a company that wants to create a better, more inclusive culture. So that was over seven years ago, and we’ve been figuring it out ever since.

One of the things that the former CEO told me—in fact, one of the first things that he’d said to me when I was still intimidated by him and before he became a friend—was, “Ben, make us uncomfortable.” And I just thought, that’s exactly the way that someone should operate, because if you’re not uncomfortable, you’re not learning anything. You’re not trying new things. And so the willingness to even say that or to be uncomfortable, to be vulnerable, that’s the first step.

There are many strikes already against people with disabilities before they go into an interview, or before they have a discussion with a hiring manager, if they make it that far. And so the idea of providing a mentor, a person that understands someone with disabilities, started to come together. The idea of a program to empower young people with older professionals who could better help them in their future.

That was the start of Achieve Ability, the professional mentoring program started at Old National Bank that pairs executive leaders with individuals with disabilities for a ten-month mentoring program. It’s so simple, but so perfect and makes a hundred percent sense. I work with universities to recruit aspiring professionals with disabilities to be matched with leaders at our bank from August to May, where they meet once a month for mentoring sessions. By connecting these young people with these mentors, we create champions and advocates for them.

It started with just one executive leader, and it’s really grown. We’ve had folks with spinal cord injuries. With cerebral palsy. Who are blind or deaf. Or who are on the autism spectrum. After this year, we’ll have had 68 mentees that have participated in the program. The outcome is to empower the young person, to allow them to have more confidence for after their graduation, to better equip them with a more complete professional network. Without this program, they may not have the champion they need to get their foot in a door.

On the flip side, our leaders are learning how to interact and learn about individuals with all abilities. They’re learning the challenges, the opportunities. And our leaders are the first to say that they have learned way more from their mentees than they have been able to give to them. So one relationship, one person at a time, we are creating a more inclusive leadership team. We’re creating, quite frankly, better leaders. Achieve Ability is truly transforming our organization from within.

My job is to match the mentees with mentors. So for instance, I recently met a finance student. He’s very soft-spoken, but after one conversation, I knew he was wonderful and wicked smart—and very interested in competitive car racing. Well, the CEO of our wealth department also has a finance background, and he happens to be a Formula One fan. So it’s those little things where I can look at commonalities or personality types, where these young individuals and our leaders can hang out, talk shop but also share similar interests. It creates a bond, and they take the relationship more seriously. And almost always, these relationships continue on forever.

Our ultimate goal is to share this program with every single community, employer, and state that’s willing to adopt being more inclusive. The fact is, if you’re going to have a successful workforce, you have to have a commitment to a diversity, equity and inclusion goal right now. This doesn’t cost any money—it just takes time as an investment. And quite frankly, inclusion is the most important investment that you can make.