When Frankie Rice would attend the races at the Hibbing Raceway, he told his daughter Heaven and his family that he had the best seat in the house. Rice had that taken from him on Nov. 12, 2020, when he was struck-and-killed by an impaired driver just north of Hibbing Taconite on Highway 5. That accident left a big hole in the Rice family, but his sister, Heather Jeffers, made i 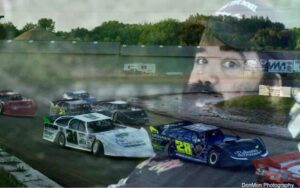 t a mission to not let her brother’s life end in vain.

Jeffers and the Hibbing Raceway will keep her brother’s memory alive with a Frankie Rice Tribute Race Saturday [July 24]. Hibbing Raceway board member Mark Trenberth didn’t hesitate when the family contacted him about the idea.

“They wanted something done for his memory,” Trenberth said. “They wanted to know if we could have a night dedicated to him.”

Going to the races was special for Rice because he always brought his daughter, Heaven, to the track. There was one night in particular that they attended the races.

“He made sure he brought her to the bike races every year, so we picked the night where we gave away bikes to the kids,” Trenberth said. “That’s when he brought his daughter to the races.”

Heaven, who is now 15-years-old, won a bike 10 years ago, and going to the races with her father was always a special event in her life.

“I wanted this race because that’s where we had our connection,” Heaven said. “Winning that bike with my dad like that was special. After that, I would go with him to that particular race each year. That’s a special memory with that particular race.”

“Now, it’s an ongoing tradition. My dad is smiling because I live in Minnesota, and I’m going to races with the family now.” According to Jeffers, it’s been a tough year, but she’s glad to be able to honor her brother with this special night.

“It’s been a journey, I can say that,” Jeffers said. “It was a huge struggle when he passed away. What made it harder was COVID because getting together was difficult. As a family, we felt cheated not only because of his death, but our inability to get together and celebrate his life. I wanted to find a way to support him. He was loved by so many people, but what he loved most was the race track. I reached out, and we got it approved through the board. It’s coming together.”

Through hard work and diligence, Jeffers raised $6,000. That $6,000 will be added to the driver’s purse for the evening.

“Heather went around and got donations from local businesses to put toward prizes, drawings and that purse,” Trenberth said. “For the racers, it’s quite an elevated purse.”

Jeffers is hoping it will draw some bigger names from the area to the track. “I want to see them put on a good race that night,” Jeffers said.

According to both Trenberth and Jeffers, MDI, which is where Rice was employed, has graciously donated a large sum of that money. MDI has also donated six bikes for the drawing, among other assorted prizes.

“He had been at MDI for some 20 years,” Jeffers said. “His co-workers have been a huge support for us. It’s like they lost a family member. It’s been amazing to the family to see how much he was loved.”

A lot of time has passed since the tragic accident, and the family is slowly but surely coming to grips with it. “We’re getting through it day-by-day, minute-by-minute,” Jeffers said. “He loved going to the races, talking shop in the pits. The racers have had a lot of kind words about him.”

To also honor Frankie, a plaque will be placed in the grandstand at the ‘Best seat in the house.’ It will say, “Frankie Rice: Forever a racing fan.”

“This is great,” Trenberth said. “It shows the power of family, the common ties that bind. I remember Frankie at the races with a smile on his face. This was his happy place. When I heard about the accident, it was tough to take. The fact that the family and sponsors wanted to be involved… That shows a tremendous outpouring in the community. It’s an emotional thing.”

Article was published on June 22, 2021 and can be viewed in the Mesabi Daily Tribune.