MDI has a long history with and continues to invest in its social enterprise model on workforce inclusion for people with disabilities.

MDI has a long history with and continues to invest in its social enterprise model on workforce inclusion for people with disabilities.

Original article was published on October 8, 2016. 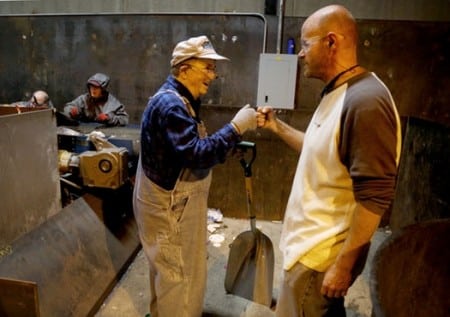 The morning sky was still dark when a bus carrying two dozen adults with disabilities pulled up before a small factory on the Iron Range. Many of the passengers looked half asleep as they stumbled into the hazy drizzle clutching lunch sacks and mini-coolers.

But that did not prevent John Week, a container of coffee steaming in his hand, from darting from one person to the next, pumping fists and shouting words of support. “Hey grumpy bear! How ya doin’?” he said, embracing a man in a wheelchair. Moments later, the workers were wide-awake and laughing as Week led them through a round of stretching exercises. “Let’s roll!” he yelled, as workers rushed to the factory floor.

The workers’ buoyant mood on this fall morning underscored how a small recycling plant in Itasca County is pointing the way toward a new era of opportunity and inclusion for Minnesotans with disabilities. In stark contrast to the grim realities faced by thousands of other workers with disabilities across the state, employees here earn enough money to buy cars, go on cruises, save for retirement and support their families without government support.

And unlike thousands of other disabled Minnesotans, who go to work each day in cloistered settings known as “sheltered workshops,” all the workers here are guaranteed at least a minimum wage, performance bonuses and opportunities for advancement. 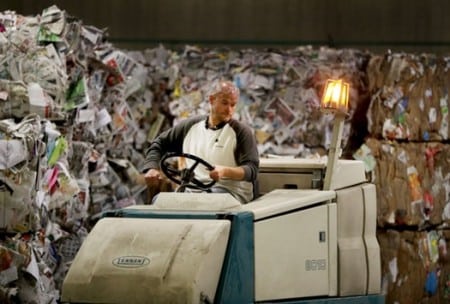 WEEK USES A MACHINE TO CLEAN UP THE RECYCLING FLOOR BEFORE MOST OF THE OTHER WORKERS ARRIVE FOR THE DAY.

The recycling plant, which opened in July and employs nearly 80 people, is an oasis of opportunity in a state that is still plagued by chronically high rates of unemployment and poverty among people with disabilities. Only 36 percent of working-age Minnesotans with a cognitive disability were employed as of 2013 — less than half the rate of their non-disabled peers; and a mere 13 percent worked in the community alongside people without disabilities, among the lowest rates in the nation.

While other states have moved aggressively to integrate these workers into the general workforce, Minnesota continues to subsidize workshops where pay for “piece-rate” work often amounts to less than $1 an hour, a 2015 Star Tribune investigation found.

Under pressure from the federal courts, Minnesota has stepped up efforts to address this wide workplace gulf. In August, vocational counselors began fanning out across the state to evaluate whether thousands of people in state-subsidized workshops could instead be working in the community at a competitive wage. The administration of Gov. Mark Dayton has pledged to move nearly 20,000 Minnesotans with disabilities receiving state services into competitive, integrated employment.

Yet Minnesota’s integration efforts are still in the early stages, and disability advocates fear they will falter without more support from large employers. Even in state government, the percentage of workers with disabilities has dropped from 10 percent in 1999 to just 5.9 percent in the last fiscal year, state records show.

“There is a growing recognition that we have to give people with disabilities a pathway to real work, and not simply place them in artificial communities and forget about them,” said Alison Barkoff, a disability rights advocate in Washington, D.C.

The Cohasset plant, operated by Minnesota Diversified Industries, and others like it on the Iron Range could offer a new model of inclusion. The plant mixes individuals with a broad spectrum of disabilities and productivity levels with more able workers, in an environment where everyone is expected to perform at a high level. MDI officials say the model elevates people who might otherwise be isolated in sheltered workshops while still providing them with workplace supports. 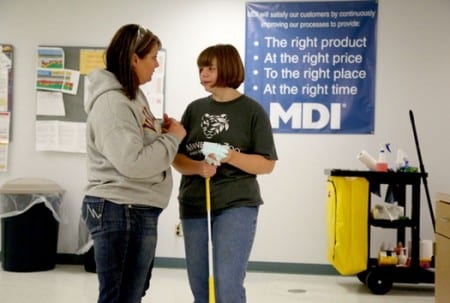 Some disability advocates fault the approach because it falls short of full integration. Yet it may offer an interim step for thousands of workers who live in communities where job opportunities for people with disabilities are scarce, MDI officials maintain.

“In a perfect world, everyone with a disability would be working in the community,” said Peter McDermott, president and chief executive of MDI. “But in the real world, that’s not going to happen right away. We need to migrate people into a real-world setting and show people that they are able to do the work.”

‘People made assumptions’
It’s not even 7:30 a.m., and glistening beads of sweat were already forming on Week’s shaved head as he crisscrossed the Cohasset plant with a mop and clipboard, joking with workers as he checked the machinery. One day, Week wore a step counter and discovered that he walks nearly 11 miles with each work shift.

“I laugh at people who join fitness gyms,” he said as he reached down to unjam a conveyor belt. “This is nonstop activity and I absolutely love it.”

Few people here know that Week was born with Bell’s palsy, a condition that can cause facial paralysis. For much of his adult life, until he received treatment, Week’s head was tilted so far to the side that he suffered severe neck and back pain. Apart from a brief stint flipping burgers at a McDonald’s, he was unable to find a job in the mainstream workforce. Week said he spent years folding cardboard boxes at a sheltered workshop in Grand Rapids, earning poverty-level wages, before getting hired at MDI.

HERE, WEEK, CENTER, CHECKS ON WORKER NATHAN NICHOLS, WHO HAD DEVELOPED A HEADACHE THAT HE SAID FELT LIKE A TRAIN GOING THROUGH HIS HEAD, BEFORE WEEK ESCORTED NICHOLS TO THE OFFICE FOR REST AND EVALUATION.

As he paced the factory floor, Week stopped to comfort a young worker with Down syndrome whose head was buried in his hands. “It feels like a ‘choo-choo train’ is running through my brain,” the worker said, as Week gently walked him toward the break room. “It’s different here than other places,” Week said, as he fixed the worker’s cap. “Here, we’re all just people.”

Ryan Scharnott, 30, who has battled epileptic seizures since childhood, said he has earned enough at MDI to go on golf outings and vacation cruises to Alaska and Hawaii. It bothers him that some of his friends with disabilities lack the same opportunities. One of his housemates, he said, brings home paychecks from a workshop of less than $1 an hour. “A lot of us here feel like we’ve finally made it, but we feel bad for those who haven’t,” Scharnott said.

Until the Cohasset plant opened, most of these workers toiled in the basement of an old potato barn in nearby Deer River that was turned into a small recycling facility. Huddled in the drafty building, the workers were largely isolated from the mainstream workforce and had few opportunities for advancement, they said. “It was cold, cold cold!” said Breanna Terwey, 23.

Their fortunes changed dramatically when the Deer River facility joined with MDI, a nonprofit that manufactures millions of plastic containers for a government contract and other large customers. Using its deep pockets, and a $1 million grant from the private Blandin Foundation, MDI acquired an empty warehouse in Cohasset and then moved all 74 employees from Deer River to the new facility. While MDI focuses on integrating people into its five plants, the nonprofit also helps workers find outside jobs in the community. Its Grand Rapids plant has a wall blanketed with dozens of job postings, all paying at least minimum wage. Even workers who receive job support services are referred to as “employees,” instead of clients, and make an average wage of $9.88 an hour plus benefits. About half of MDI’s 508 employees at its five plants have disabilities.

On a recent afternoon, Week looked upbeat as he sorted through a stack of files on his desk. He had just received a positive job review, which meant his pay likely would be bumped up above $13 an hour. Finally, Week mused, he might be able to go on a long vacation with his wife and five children, and fulfill his ambition to someday see the Pacific Ocean. 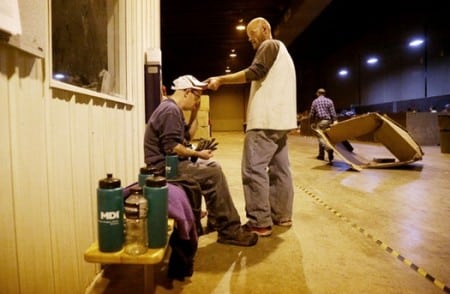 “I’ve spent my whole life here, surrounded by woods and lakes,” he said. “It’s nice, but we all want to experience something bigger.”